ubuCon Asia is a community event organised by the Ubuntu LoCo teams of the Asian region. It is a virtual conference that started today, 25 September 2021 and will last till tomorrow.

Attendees need to register on eventyay.com and get a conference ticket for free before they can access the meeting rooms. There are two meeting rooms with presentations happening simultaneously like the usual conferences.

I attended this morning's keynote which was delivered by Ken VanDine, Engineering Manager at Canonical. Ken gave a brief about what's happening with the Ubuntu community. He highlighted the features of the upcoming release of Ubuntu 21.10 Impish Indri scheduled for 14 October, less than a month away.

He mentioned that in the recent Beta release of Impish Indri users will notice that the Firefox browser is a snap package rather than the usual deb packaged. He explained the choice as being a collaboration between Mozilla and Canonical developers.

He talked about Ubuntu's choice of Flutter to develop native apps. The current Ubuntu installer is a Flutter application. He showed a demo of how to install the Flutter SDK and Visual Studio Code on Ubuntu using the Software Center. He then installed the Flutter extension and brought up a quick demo app on Flutter.

It is good to note that there is a yaru-flutter package that provides the look & feel of the Ubuntu system theme to Flutter apps.

Canonical has been pushing Flutter as the choice of native app development on Ubuntu since quite some time now and with the demo by Ken VanDine it becomes apparent how effortless Flutter development is on the Ubuntu desktop.

Some nice sessions are planned today and tomorrow, giving Linux users tips and tricks that they can use daily. Many of the sessions are done in native languages like Bahasa Indonesia or Japanese with English transliteration.

Tomorrow at 08h45 MUT, Kukuh Syafaat, a friend from the openSUSE Indonesia community will present Snap in MicroOS.

Snap is a package manager for containerised software packages. It is used mainly by Ubuntu derivatives. Kukuh Syafaat will explain how to use Snap in openSUSE MicroOS, a Linux distribution designed mainly for container hosting. However, there has been efforts into having a MicroOS Desktop with an immutable OS concept. MicroOS Desktop comes with Flatpak pre-installed. It'll be nice to see support for Snap as well. 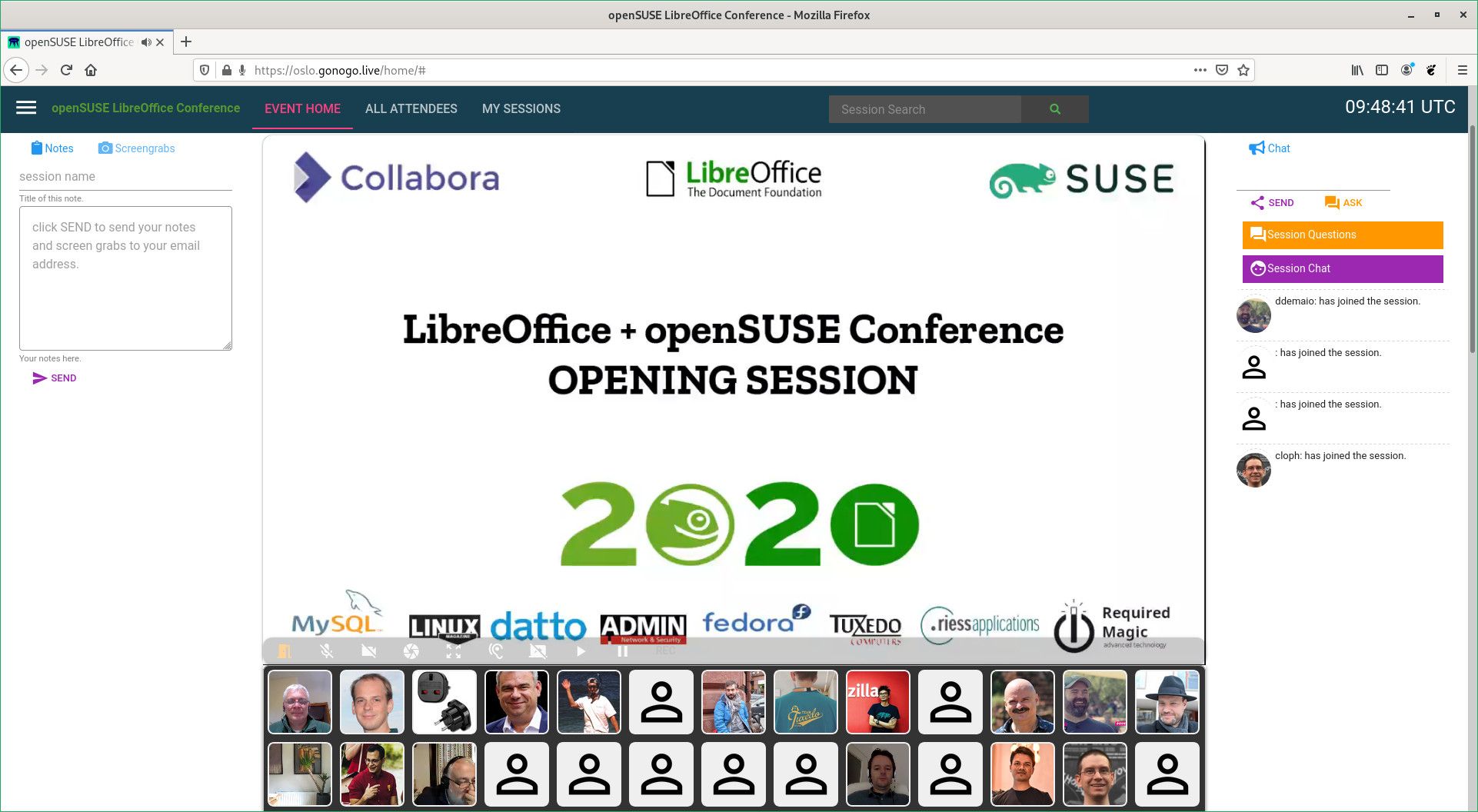 oSLO 2020 kicked-off on Thursday 15 October at 10h00 UTC with an opening address by The Document Foundation's Chairman, Lothar Becker.

The conference was due to happen in Nuremberg, Germany, but because of the pandemic the plan was changed and the event went fully online. Three sessions ran simultaneously in virtual rooms. Two rooms hosted the short & long talks while the third room hosted the workshops.

During the opening session, as more people kept joining, the platform started to show signs of high load. People reported issues with the audio quality and some said that the page was not loading at all. Thanks to the Telegram group dedicated to the oSLO Conference communications, issues were being promptly reported and handled. Within a matter of minutes the organizers arranged to move the all sessions to The Document Foundation's Jitsi instance. The latter worked like a charm. The organizers and volunteers who helped in the swift transition did a great job.

The conference room 1 easily held more than 80 participants at one time and there was no degradation in the quality of audio/video.

Getting started with Podman

I had my talk on Podman scheduled at 13h30 UTC on the first day of the conference. It went fine, except my poor timing of not being able to wrap it up as a short talk of 15 mins. I'll improve next time. 😉

Listening to @IshSookun talking at the @openSUSE conference about:

Getting started with #Podman

Learn about #containers & what they are made of...https://t.co/c5hQgeGdO7

I shared my slides on speakerdeck.com right after the talk.

The second day was even more fun. I hopped into the conference chat room from time to time to have a chit-chat with friends. It was not the same as having a geek talk over a beer during the conference after parties, but I was glad to see friends from the other side of the planet. I was happy to see that they are doing well.

At one time during the beer chat, I was talking to two conference participants, one was from Taiwan and the other from Bulgaria. It is always funny to see people's reaction on how small Mauritius is compared to the other countries. Well, I am proud of the tiny dot in the middle of the ocean. 🇲🇺

Meet the openSUSE Board

The last session in the room 1 of the conference, on the second day, was held by the openSUSE Board members.

They provide updates and statistics about the project over the past year and tell us a bit about what the Board is planning for the future.

It is also the time when openSUSE members can ask questions.

The session was scheduled at 21h00 UTC which was 01h00 in the morning (the next day) for me. I was tired but I enjoyed the session. I jumped into the conversation when there was a comment about having a diverse representation on the Board with people from different parts of the world. I commented as an official of the Election Committee, encouraging members from all parts of the world to step up & run as candidate or nominate someone for the next Board election.

See you next year!

Italo Vignoli, founding member of The Document Foundation, during the closing keynote of the openSUSE + LibreOffice Conference (oSLO 2020), asked participants to share comments on how to improve the conference experience. He pointed out that this might not be the last virtual conference, considering the pandemic, although we all would love to have a physical conference soon.

Kudos to the organizers and volunteers for a successful conference. 👏